Wait for the smack!

The secret recipe of Morten Bak.

I had the good fortune to work night shifts with the über Breadman, Morten Bak whose bread is famous even with people who actually never tasted his bread but only heard of it. Hell its even famous amongst people who never met Morten! Morten was so kind to allow me to follow the entire process of his bread making one night, (probably because he was sick of me asking about his recipe every time I saw him!) and he gave me his permission to publish his recipe – so here is the result: a somewhat crazy against all logic recipe for a bread that tastes, feels and smells like something out of this world:

About 800 ml liter of cold water
About 1 kg of white strong flour
About 10 grams of yeast
Lots of salt ( I seem to recall him putting like 3-4 tea spoons in!)
And a lot of beating, nothing else- beating and lots of time to rise.

As I observed there are five parameters that are essential :
1. The dough must be wet (approximately 40 % liquid), a lot wetter than I am used to- almost like a thick porridge.

2. The beating! This dough needs to be worked through beyond what you might imagine. When you think enough is enough, you have to push a bit more, and a bit more- as The Breadman says: ‘Wait for the smack!’ And he is right, when the dough against all odds ( because it’s such a wet dough) forms a ball that starts slapping around in the mixing bowl with a smacking sound- it’s ready! You need a good strong machine or it won’t work – and even so you might have to hold the machine down ( the Breadmans machine has been on the floor quite a few times) I have to admit my Kenwood is really not up to it and I am considering buying an other machine as the mixing time is almost a bit more than half an hour- and The Breadman’s mixing only took about two times 6 min.

4. The very high temperature when you bake it. 5. DO NOT PUNCTURE the dough when cutting it into loafs and placing them on the baking tray! If you do, you don’t get the holes in the bread!

Procedure:
Morten started by mixing the water ( cold water) with the yeast and salt ( which in my book makes no mind as the salt kills the yeast- we all know this, but as I said, this recipe is against all logic)- he turned the machine on vigorously for 6 minutes-( again it makes no sense) and then added the flour – and he adjusted the amount of water: the dough has to be wet- so wet it’s almost a thick porridge. He then worked it at high speed- and told me:’ Listen for the smacking sound- wait for it, wait, wait- there! Did you hear it?’ And I did.
It starts out being so wet it’s like a thick porridge, then it gradually gathers into a ball and at the end, the very very end, beyond anyone’s limits for reasonable patience – it does smack!

And when I make this bread I use my eyes to watch the dough – and every time I am inclined to stop, because it LOOKS ready- but I hear the voice of Morten in the back of my mind:’Wait for it’ -‘ and I wait- and every time it’s true, it’s audible- you can actually hear when it’s ready. ( and yes, I have tried stopping it when my eyes and sense of logic tells me it’s ready- and the result does show in the finished bread, it’s not as elastic and springy. I have a notion of him saying about 6 minutes. As I said earlier with my Kenwood Major it takes more than half an hour- and I have to hold the machine from falling to the floor.

Let the dough rest in a cold place covered with a cloth over night like Morten does- he starts off the dough when he gets in at work and bakes it in the morning, so the whole place smells like bread heaven. As he said, he’s seen people cover it with plastic wrap, but he always uses a cloth. (And I have an idea this might be part of the magic- as the dough gets air to work with.)

When the dough is ready its grown a lot, maybe out of the bowl, and it will be really bubbly and almost alive. I swear I saw it move!

Now comes another crucial  technique: shaping the breads. I have tried not following it, it tastes good but the texture won’t be as good. You want this bread to be light and full of holes. If you puncture the holes, it won’t work and the bread will be heavier. So dust your clean kitchen counter top with a lot of flour ( so the dough won’t stick) and pour the dough out on to it, carefully. Where in the process of making the dough you beat the crap out of the dough, now it’s time for some tender loving care! Use two dough spatula ( I really don’t know the word for it) to CAREFULLY cut out small breads and place them CAREFULLY on a dusted baking tray, and use the spatulas to sort of fold the sides in, under the bread as to tighten them. Do not make the breads too big and do not worry if they don’t look perfect, they are supposed to be rustic and uneven looking, it’s all part of the charm. Bake the breads at 250 degrees- for approximately 25 minutes or until done. My oven burns them if I bake them for 25 minutes- so adjust as you think. The breads are done when they are done in the bottom. I lightly tap them and if they sounds finished they are. Of cause Morten Bak just looks at them and know when they are finished, but hell- he worked on this bread for 6 years! You’ll know you got them right if the breads are golden brown with light crisp crunchy bubbly thin crust, the inside should have holes in, be a bit chewy and springy ( the test is: when you push down in a with a finger, the dough should bounce back up) but still very light- and they should taste like magic- bread so good it almost feels like a crime to put me ore than just some fresh butter on it. This bread stays moist, fresh and delicious for a day or two even- but if you bake more than you can eat in a day, freeze some- and then just pop them in and the oven when you wants a loaf of delicious bread. I tried roasting a slice ( or ten) on the second or third day after, it’s simply fantastic!

This is my kitchen and I call the shots here. But I am always open for new ideas and always curious to thread into the unknown tastes. View all posts by Ganda 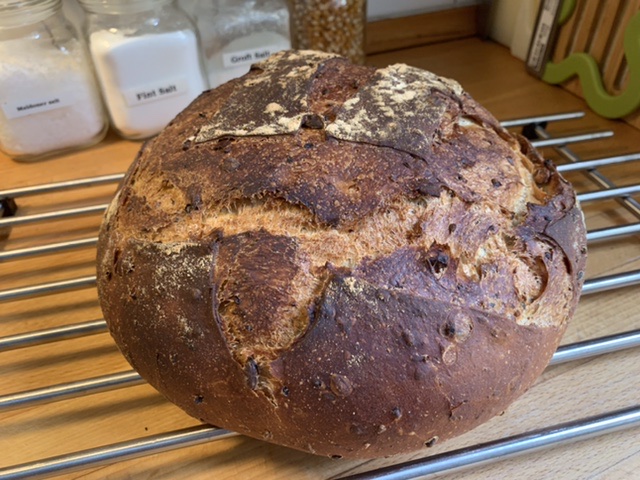